Kings of the Silver King 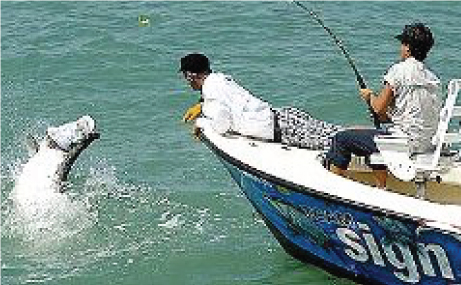 Half of his logo-emblazoned shirt drenched with sweat, the burly angler tried to figure out the next move of the 100-pound plus fish still swimming powerfully on the business end of the straining rod and reel combination.

The man at the helm of the 22-foot Century bay boat wore a worried look as a fellow boater with only a good time on his mind drifted ever closer toward being a hindrance for his team’s ability to fight their fish.

Twenty feet below and 50 feet starboard, the tarpon played the scenario over in its mind as well. First on its list was ridding itself of the hook locked in the corner of its mouth, it being the source of that which seemed intent on pulling it closer and closer to the surface.

There, the fish’s advantage actually increased with the relatively thin air providing the means for a quick, powerful headshake that could shake free the hook or, more likely, pop a frayed leader.

But a move to the surface also meant possible capture by the seasoned wireman of the four-man team, whose many years of tarpon fishing had honed his skills in close-quarters capture. It also left little room to maneuver from the trio of menacing bull sharks, who had sensed something erratic in this fish’s behavior 10 minutes earlier and now inched closer with each passing minute, ready for their strike instincts to kick in.

This scene and many others like have been taking place the past three weekends in Charlotte County, Fla., as the Professional Tarpon Tournament Series (PTTS) races toward the finish line with this weekend’s Jim Beam Tarpon Championship.

For decades, anglers from around the country have made a pilgrimage to Florida for a shot at a tarpon. Countless texts and spectacular photography of tarpon’s uncanny aerial acrobatics have whetted appetites of adventurous travelers.

Just this decade, however, saw the birth of the team professional tarpon fishing, and like a tarpon’s initial jump, the concept has sky-rocketed in popularity in the Sunshine State.

Teams consisting of four anglers  only two of which can be professional guides  fish in five weekly qualifying events.

These five-hour derbies take place smack in the middle of the intense weekend rush that can see as many as 200 boats crowd the fishing grounds  in hopes of making it to the PTT Jim Beam Tarpon Championship. The top 25 teams are shaved to five finalists for this Monday’s three-hour championship.

The Professional Tarpon Tournament Series (PTTS) is a made-for-TV catch and release tournament series that is unique in many ways, not the least of which is its location: Boca Grande Pass.

The famed inlet, known internationally for its fantastic spring and early summer tarpon run, connects Charlotte Harbor to the Gulf of Mexico and serves  by strictly interpreted rule rule 5A  as the sole staging area for the sports richest prize.

Catching “these” fish can be a major undertaking, even when the schools of thousands of tarpons, some up to 230 pounds, are on the feed.

Along with the fifty boat PTTS field, there are recreational boats and guide boats  along with tournament officials and observer craft  that can number in the hundreds, all crammed into the roughly quarter-square mile of tarpon fishing paradise. Deft maneuverability is at a premium.

“The teams have got to be able to move around in tight quarters, whether they’re fishing or fighting a fish,” Mercurio said

Fish chosen to be suitable for entry  only one per team per event  are secured and moved to the official scales, a submerged vessel dubbed the “Winghouse Weighboat,” where they are weighed and revived.

No points are awarded for dead fish, but the PTTS has never lost a fish. Points are given for the weight of the entered fish as well as successful release of a fish (50 points per release) and other categories, all in the quest to make it to the Jim Beam PTT Tarpon Cup.

Just to up the ante is the not-so-coincidental migration of bull sharks into the pass at the time tarpon act on their spawning urge. Easily the most underrated of sharks relative to danger to humans, bull sharks have a taste for tarpon, especially one acting tired and erratic as it’s brought closer to an angler’s capture.

Hammerheads, who are larger (up to 15 feet to the bull’s 9) and more intimidating than bulls, will also damage contenders’ tarpon, but it’s the packs of crazed bulls that strike fear into the hearts of PTTS competitors.

“Every year  just about every tournament  we have potentially winning fish DQ’d by sharks,” Mercurio said. “If they’re bitten by a shark, they’re done.”

Catch ESPNOutdoor.com’s coverage of the Tarpon Cup Championship this Sunday and Monday.